You are here: Home / HIstory / The Union Flag Rises Over Menorca – Part III

The Union Flag firmly established on Menorca as a Crown Colony of Great Britain. The ‘Golden Age’ begins. Lt. Colonel Richard Kane and his legacy

Even before Menorca was ceded to Great Britain at the signing of the Treaty of Utrecht in 1713, Richard Kane had arrived to take up his post as Lieutenant Governor under the nominal Governor, the Duke of Argyll. However, the Governorship was really Kane´s (as detailed in last month’s article.)

Under the Royal Appointment of Queen Anne, Richard Kane was chosen because of his outstanding military career alongside her father King William III in various battles in Canada, the Low Countries and the famous Battle of the Boyne. His diplomatic skills had also been well noticed.

Kane was born in 1662 as Richard O´Cahan in County Antrim, Ireland (which was one country at that time). He was a Protestant and decided to anglicise his name to Kane when he entered military service.

On arrival in Menorca, Richard Kane’s first duty on behalf of Queen Anne was to call together the people of the Island and request them to submit their recommendations for the future of Menorca and for the betterment of all the inhabitants. It was stipulated by Queen Anne that ‘Their Civil and Religious Rights should be recognised in the best and most perfect manner possible.’ This was the first time and only time in history that the Menorcans were invited to submit their recommendations on their future directly to a ruling power.

Following these talks, councils were formed in Ciutadella and Mahon. It was through these bodies that Richard Kane was able to convey his instructions and impose his authority on the people. He proved himself a fair disciplinarian; the troops were kept well ordered and any misdemeanours were severely punished. They had to respect the people as equals and not as conquered.

He allowed all religions to be recognised but did initially find some animosity from the hierarchy of the Catholic church, especially when he banned the Inquisition (a hundred years before it was to happen in the rest of Spain). However, they soon realised how fair and just their new ‘Governor’ was and, with a few dissenters, thereafter worked with him to pursue the betterment of the lives of the people.

When the British arrived on Menorca a census was carried out on 20 April 1713 which shows the population numbering 16,046, with almost 10,000 living in the two cities of Ciutadella and Mahon in equal numbers. The rest were scattered through the rest of the towns and rural communities.

The population exploded when almost 7,500 troops and marines arrived with the first fleet. These were followed over the following year by carpenters, blacksmiths, innkeepers, brothel keepers, import/export merchants and all the many wives and children of the troops. This almost tripled the population and Menorca just could not sustain that number of people.

The Menorcans had been largely impoverished, subsistent peasant farmers growing pumpkins and melons and living on a very unhealthy diet. The indigenous cattle gave little milk and even less meat as they were badly nourished. There were some poultry but eggs were a luxury.

Horticulture was very dear to Kane’s heart and so he required the farmers to establish orchards and vegetable gardens and to start growing cabbages, turnips, carrots, beans, peas and onions. The whole population was advised to grow vines, apples (pomes dén Kane), plums. Figs and even blackberries were also introduced in order to make the island self-sufficient.

He led by example with the draining of six areas of low lying marsh land to make market gardens as at Hort de Sant Joan (St John´s Gardens) at the inland end of Mahon Harbour alongside the start of the Fornells’ road.

He also dramatically changed agricultural practice with the introduction of new breeds of poultry, the saddle back pigs from Sardinia, but most importantly the Frieson cattle. With the shortage of grazing and fodder he arranged the introduction of Trifolium pratense, a type of red clover called Trébol (Trefoil in English), which was found to be highly nutritious for ruminating animals.

In Richard Kane´s first surveys of Menorca, he states the Island being crisscrossed by a myriad of badly maintained lanes and cart tracks, built by the Moors ten centuries earlier, not wide enough for a horse and cart to pass. Many of the tracks were so deeply rutted by cart wheels over centuries of use that during the rainy months they became waterlogged and traffic came to a standstill.

Not only was it essential to transport the food from the farms to the main centres of population but also, importantly, to quickly move the military from one end of the Island to the other in case of an invasion by France or the Spanish followers of Philip. He therefore ordered a road be built from one end of the Island to the other. The road on which construction commenced in 1714 was designed to very exacting specifications. It was to stretch from Ciutadella to Mahon. An amazing feat of engineering as it was completed by 1720 using British troops augmented by labourers from the various towns and villages.

Kane took his engineers into the countryside and drew up plans for the route of the new ‘English Royal Road’. Three centuries later, parts are still in use (the length from Mahon to Mercadal). 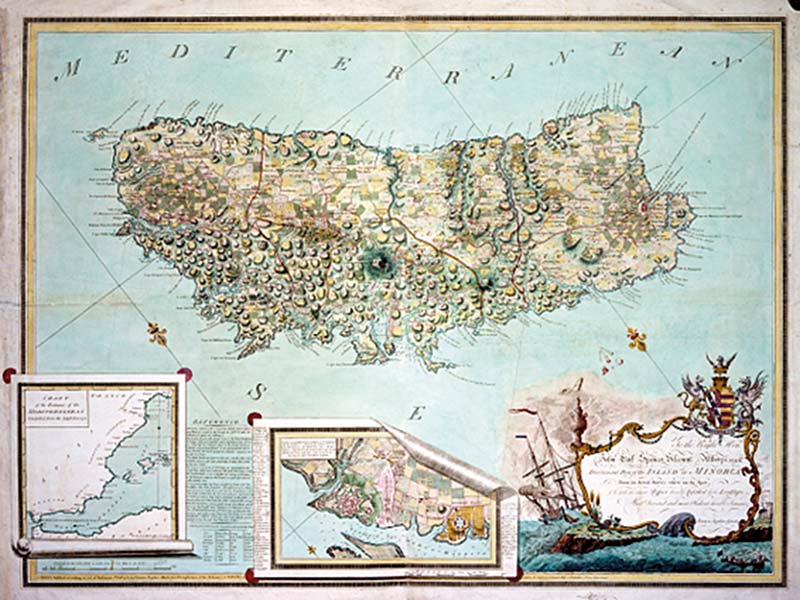 The famous upside down map of Menorca drawn by Earl Spencer (an ancestor of Diana, Princess of Wales) shows the Island’s terrain, the specification and the route of Cami de’n Kane. (Copies of this can readily be seen throughout Menorca)

Once constructed, the road afforded improved transport links and opened up the whole Island to trade. This greatly helped to increase the prosperity of the people and the towns and rural communities became less isolated. On its 250th anniversary in 1986, that stretch of the road from Mahon to Mercadal was restored to its present condition and asphalted. A marble monument to Richard Kane was designed in 1919 and erected in 1922.

A translation of the Latin inscription on the monument reads: ‘This public highway running from one end of the island to the other was first paved and finished in 1720 by the initiative of Richard Kane, Lieutenant Governor, a name deservedly cherished by his countrymen and by all Minorcans.’

Always aware of a potential attack by the French the improvement of the defences of the Island had to run in parallel to all the other works. The enlargement of St. Philip’s Fort at the mouth of Mahon harbour made it into what was eventually to become one of the largest British fortresses in the world at that time. Work began on the building of St Anne’s Fort on the opposite side of the harbour entrance, the oldest part of La Mola, and finally on the fort of Filipet at the end of the Lazareto peninsular, from where chains could be dragged from one side of the harbour to the other to impede enemy ships from entering.

The shipyard facilities for the Royal Navy were also moved and improved so as to cope with the volume of ships now arriving.

Although most of the content of this article has been researched personally I would like to acknowledge the biography, The Life of Richard Kane (ISBN 84-606- 3275-X), written by a good friend of us all in Menorca, Bruce Laurie (deceased). Should anyone want the full detailed story of Richard Kane then this must be it.

Chapter 4, ‘Life Continues to Improve under the Union Flag’ will appear in the September edition of ROQUETA and continue with more of Richard Kane´s achievements up until his death and also the British period up to and including the French invasion of 1756.