You are here: Home / Other Topics / Made in Menorca 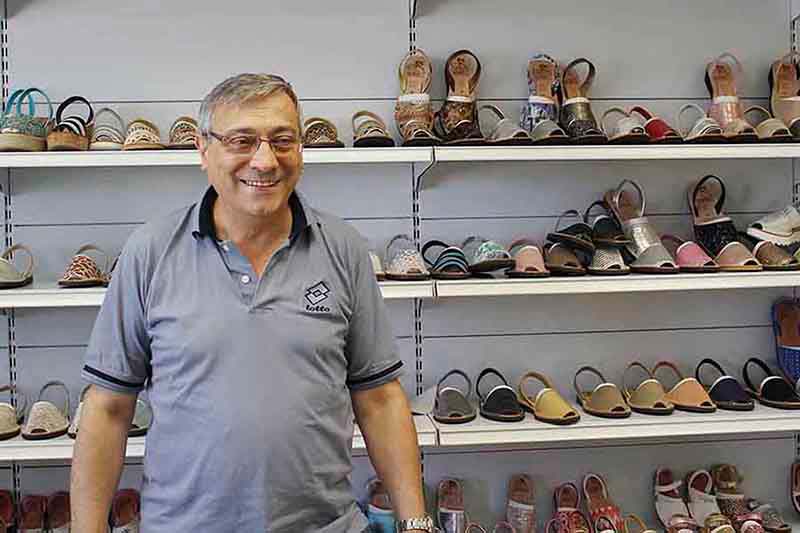 It is fair to say that the development and sales of the Menorcan avarcas over the past few years has been phenomenal. Originally used by the local farmers and peasants on the land, they were easy and cheap to make, using old tyres as the sole.

Now this sandal is big business, and there are a number of manufacturers supplying the Menorca and Balearic market.

MIBO is one of the important brands, and has been making avarcas since 1998, albeit originally from the garage of the founder, Miguel Pascual. He developed the business with his partner, Bosco Moll, moved to the current factory in 2008, and employs over 30 people full time in Es Migjorn Gran.

When we visited the factory, it was good to see that most of the work is still manual, maintaining some of the tradition of Menorca’s shoe making trade. There is a long line of lasts in varying sizes that are used as the starting point. The leather is cut, soles affixed in efficient time and motion and then boxed up ready to go.

In such a competitive arena as the avarcas, marketing and branding are important features of the brand’s success, and MIBO have a well-designed, modern and attractive look. The avarcas themselves have a wide range of styles and appeal to a broad audience.

MIBO control their own destiny, owning seven retail outlets on the Island, two in Mahon and Ciutadella, and also in Mercadal, Son Bou, and at the factory.

They are looking to extend their sales reach and have had some success in markets as far afield as Dubai, Australia and London, and have recently launched on-line.

In the July edition of ROQUETA, the Island News covered a story about Italian agriculturist Omar Zola Antonino growing saffron on the Island. So we decided to go and take a closer look.

The farm, Santa Margarita, is located just outside Es Mercadal, and is set on a beautiful hillside with the farm at the top. Saffron is very seasonal, so when we visited the flowers were not visible.

Omar learnt his trade in Sardinia, and. as it is on the same latitude as Menorca, the two countries share many climatic characteristics. The saffron bulb is planted and is then harvested for three years before rebulbing. The process is totally organic; they use no pesticides.

The flowers appear in September and October, and this is when the backbreaking work is in full swing. 30,000 flowers are picked by hand every day between 6am to 11pm. They are then taken to the farm where the stamens are extracted.

The better Island chefs are regular visitors to the farm, to see how the saffron is developing, and this is his main market at the moment.

He tells us that the quality of saffron on the general market is very poor. When he visits the kitchens of restaurants he can demonstrate that a chef only needs to use a fraction of his product compared to that found on the open market. The result of his ingredient is a golden colour in paella rather than a disappointing orange one.

I asked him what an Italian saffron grower was doing in Menorca. His answer: Of course, because I fell in love with a local girl.