By the time this issue of ROQUETA reaches the shelves, Easter or Pascua will be upon us: Lenten austerities will be coming to an end and Semana Santa (Holy Week) about to begin. So, putting aside chocolate eggs, hot cross buns and Easter bunnies, we decided to look at some of the seasonal rituals you might experience here in Menorca. 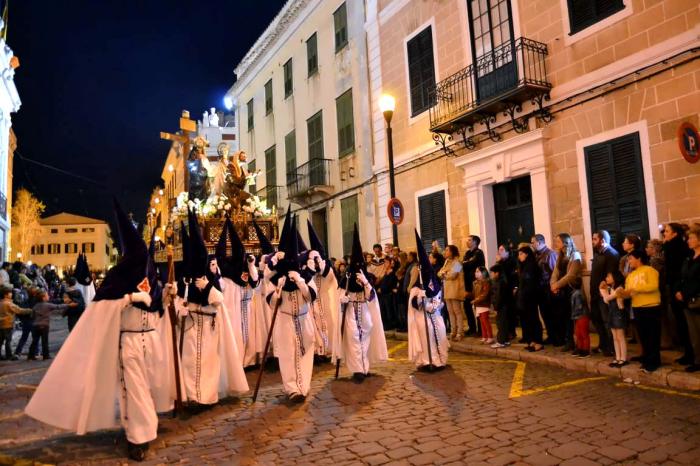 If you’ve been in Mahón recently, you may have seen S’Ávia Corema or Granny Lent. Her gegant is installed on the Mahón Town Hall balcony from Ash Wednesday onwards, and every Saturday during Lent, she comes down to stand by the Iglesia de Santa María. When the church bells ring out noon, she parades through the streets, accompanied by a band and followed by hordes of excited children and their parents, who will all periodically burst into the typically scatological song traditionally associated with S’Ávia Corema. 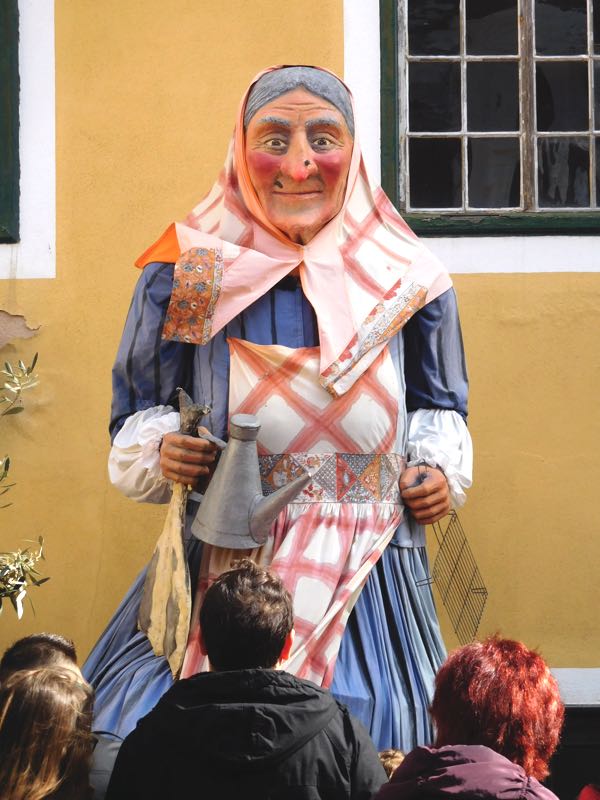 Warty big-nosed Granny Lent carries a bacalao, the traditional salted cod, an oil cruet and a grill on which the fish is to be cooked. More notably, she has seven legs with seven distinct shoes. Each week a vote is cast and a child is elected to remove the chosen shoe. In this way S’Ávia Corema serves as a kind of advent calendar marking off the progress from Lent to Easter. Children often have their own paper versions of Granny Lent at home and in the classroom. And if you look in shop windows during this season, you’ll often see her image in various stages of shoelessness. In the final week, everyone gathers in the Plaza de la Conquesta and sweets galore are thrown to the children from the flowery caramelo trees that have been tended with sugar water throughout Lent.

At the end of March, you should still be able to see Granny lose a shoe in Mahón on 17 and 24 March, with the final shoe taken off and sweets distributed on the 28th (not a Saturday).

Coming just before S’Ávia Corema loses her last shoe, Domingo de Ramos, Palm Sunday (25 March), marks the beginning of Semana Santa. Celebrating Christ’s triumphant entry into Jerusalem, the day begins throughout Spain with the blessing of the palms. You’ll notice that the palms used are very pale: this is because they’re grown in the dark so they don’t turn green and remain flexible enough to be woven. The Sisters of Santa Clara in Ciutadella produce especially elaborate and beautiful versions for the children.

Domingo de Ramos is also the day of the Via Crucis, the Way of the Cross. This is the first of a number of Easter processions, all full of the pomp and circumstance which typically mark Catholic rituals. Various pasos or oats are decorated with figures appropriate to the Stations of the Cross, and members of the cofradías (Roman Catholic lay brotherhoods or guilds), dressed in their ceremonial clothes, carry these oats through the streets of Mahón and Ciutadella. You’ll see some groups dressed as Roman centurions, others as nazarenos or penitents. Some carry candles or crosses; some walk barefoot with shackles and chains on their feet.

A distinctive and for some a chilling sight in the Easter processions is the capirote. This is the cone-shaped hat covered with a broad mask of cloth with eyeholes that disguises the wearer’s face and covers the chest and back. This ceremonial clothing has assumed unpleasant connotations for many, calling to mind the similarly garbed Ku Klux Klan associated with extreme racism and lynchings in the USA.

But the capirote predates the Klan by centuries. It originates with the Spanish Inquisition, established 1478, when those persecuted for religious reasons were forced to wear a cloth that covered their chest and back (a sambenito) and also a cone-shaped capirote on their heads as a sign of remorse. At the end of the nineteenth century, these were combined and adopted by some members of the cofradías of Semana Santa to signal their position as penitentes. Look in local bakery shop windows and you’ll often see representations of these figures made out of dough.

The most important Easter procession, the Santo Entierro or Holy Burial, takes place on Viernes Santo, Good Friday (30 March). Ciutadella, the religious if not the political capital of the island, is the place to see this ceremony. The bishop leads various cofradías from the Cathedral at nightfall, usually around 8.30pm, and they proceed in complete silence – well, Spanish silence – with crowds lining the streets to watch the various pasos and the accompanying penitentes who rock from side to side. It is a solemn and moving occasion. If you can’t make it to Ciutadella, there is also an impressive procession through the streets of Mahón, accompanied by the mournful sounds of a local band.

The Santo Sepulcro containing the effigy of the body of Christ is the focal paso in all Santo Entierro processions. There are some beautiful and elaborate sepulchres, and, especially in the gloom of the evening, the figure of the dead Christ can appear eerily real, something to keep in mind if you plan to take children. 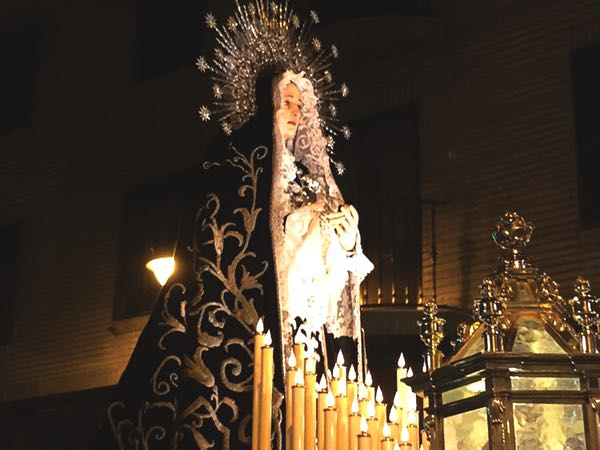 Finally, Easter Sunday, Domingo de Resurrección (1 April), is a day of celebration, and in many cities across Spain there is yet one more procession, the Procesión del Encuentro. Images of the risen Christ and the Virgin Mary are carried separately through the town streets until they approach each other in a plaza where the streets converge and the band begins to play ‘Deixem lo dol’ (We’ve left the mourning’) and ‘Regina Coeli’ (Queen of Heaven). Sometimes, the Virgin wears an elaborate black mantle, which is removed when they meet to show the movement from sorrow to joy. Procesiones del Encuentro can usually be seen in Mahón, Es Castell, Alaior, Es Mercadal, Es Migjorn and Sant Lluís.

One particularly odd ritual for marking the end of Easter is unique to Ciutadella and known as the Matances de Bujots (the killing of the ragdolls). Various associations each prepare a paper- mâché figure to represent and single out for public humiliation someone who has recently attracted collective criticism. Or something: figures in the past have represented government corruption, cuts to public funding and even limited air transport options. Identities are kept secret until they are strung up on Easter Sunday in various locations throughout the city, with explanatory signs around their necks. At midday, four or ve marksmen with hunting rifles – loaded with blanks with a little gunpowder – then shoot at each effigy until it falls to the ground in flames. 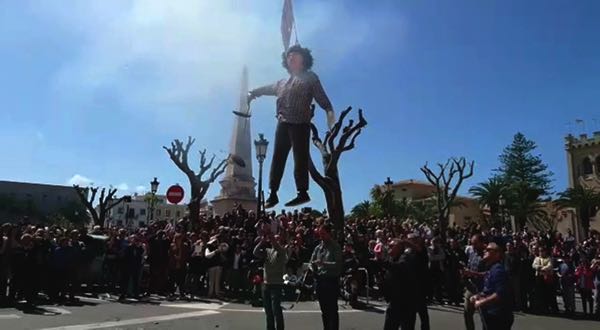 The origins of this tradition are said to be obscure. We’re wondering if may be related to the ritual known as ‘Burning of the Judas’ or ‘Quema del Año Viejo’ (burning of the old year), where an efigy of Judas is hanged on Good Friday and burned on Easter Sunday. This custom was once widely practiced throughout Catholic Europe (also – oddly – in the Dingle district of Liverpool early in the last century). It’s still popular in Greece and throughout Latin America.

Because of the distinctive addition of riflemen shooting at the efigy to set it on fire, if you want to see the Matances de Bujots in Ciutadella, one piece of advice: take your earplugs.